The United States is home to few widely produced modern supercars, with the Ford GT being among the most famous. And Versailles-based exotic car dealer Auxietre & Schmidt has what’s believed to be one of the lowest-mileage examples in existence.

The particular vehicle in question, chassis 1FAFP90S06Y400653, is one of just 541 cars produced between 2005 and 2006 in Tungsten Gray—a limited-edition color that was devised to celebrate the 40th anniversary of the Ford GT40 endurance racer’s legendary first win at Le Mans.

All original components include a 550-horsepower supercharged 5.4-liter V8 that’s constructed from aluminum and mated to a six-speed transmission, cross-drilled and ventilated disc brakes with six-piston Alcon calipers, and composite body panels.

Its provenance is short: the first owner registered the American supe in the Netherlands and hardly drove it for a decade. A second owner brought it to its astoundingly low 440-mile odometer reading after acquiring the stunning coupe in 2015.

Only 4,038 Ford GTs of this era were produced from 2004 to 2006. Hagerty lists an average price of $265,000 for this model year, but expect to an unrestored GT in this rare condition and colorway to cost much more. 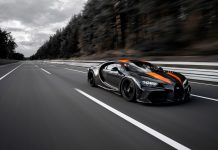 10 Sexy Colognes to Wear This Spring

New Survey Reveals the Sexiest (and Least Sexy) Accents in the United States, and...

These Are Apparently the Ten Funniest Jokes Ever, According to Science